Do you have an idea for a startup? Or an innovative technology that might be the foundation for a startup? We'd like to invite you to consider entering your startup idea or technology for consideration in our Program for Entrepreneurs.

What is the Program for Entrepreneurs

The Program for Entrepreneurs is a program that let's Duke students receive course credit for their work on starting a company.  Students can receive credit for up to two years, and work through a sequence of courses that takes them through the business planning process. The "lead students" tend to be Duke MBA students, and the rest of the team is comprised of other MBA students, graduate students, and undergraduate students. This spring, we have approximately 50 students that have applied to be considered for this program.

What role is there for us?

This email serves as a Call for Startup Ideas. Hopefully you are someone that has developed a technology or startup idea and are in need of business help. The students in the Program for Entrepreneurs can be matched with an idea (they can also select their own idea).

In addition to a general Call for Startup Ideas, you may have received this email from one of our partners: Duke's Office of Licensing and Ventures, NC State's Office of Technology Transfer, UNC's Office of Technology and Development, the NC Biotechnology Center, Square 1 Bank, Southeast TechInventures, and other sources of startup ideas have offered to help find ideas for the program.

If you participate, a description of your technology/innovation would be made available to students and, starting July 1st, they will evaluate it along with the others that are submitted. Last year we had approximately 30 ideas submitted, and we expect a similar number this year.

From July 1 to July 24, the interested students will let us know which ideas they are interested in, and we will setup informational calls for them to be in touch with you.  On July 24th, they will select their ideas and will pitch their startup concept to our Advisory group.

From August to October, they will continue to refine the business case for the startup idea, and in mid-October, they will present a pitch for our Advisory group.  We will select the top 8 startup teams, who will then enroll in the course.

We are looking for specific situations that will lend themselves well to this program.

1) We are looking for situations where there is a strong need for the development of a business case and business model, but the technology/idea has achieved some amount of proof of concept. Often this looks like technical co-founders who are experts in the industry, but may not be experts on the business side of things.

2) In addition, we are looking for situations where the founders are open to the possibility of having some of the Duke students join the team, assuming everything goes well.  In the ideal situation, after two years of working on the project, the Duke students will be able to join the company and receive equity participation that is a win-win for all parties.

Posted by Howie Rhee at 7:29 AM No comments:

Posted by Howie Rhee at 9:04 PM No comments:

Fuqua Prof. David Robinson cited in article in The Economist

Now for the creative part

Despite the gloom, there are several reasons for believing that American business retains its underlying dynamism. First, one can listen to what businesspeople say. They may be feeling wretched this year, but few doubt that things will get better. Bill Green, the boss of Accenture, a consultancy, predicts that America will come out of the recession "much earlier" than other parts of the world. He talks constantly to other chief executives around the world, he says, and their consensus is that America will begin to recover later this year or in early 2010. They give three reasons. The recession started earlier in America than elsewhere. The government's stimulus package is likely to work. And "they believe that we have a natural competitive streak—that people are going to want to get back in the game."

Second, one can look at America's admirable record of dealing with turmoil. A study by the Ewing Marion Kauffman Foundation, a think-tank that studies entrepreneurialism, found that America's high rate of economic "churning" boosts productivity and hence material well-being. Between 1977 and 2005 some 15% of all American jobs were destroyed each year as firms closed or cut back. Thanks to the expansion of successful firms and the entry of new ones, however, many more jobs were created than destroyed. Start-ups (ie, firms less than five years old) provided a third of the new jobs during this period.

The credit crunch is making it harder for new firms to find capital. That matters: not all entrepreneurs start up in their garages with money from "family, friends and fools". In a survey for the Kauffman Foundation of 4,163 companies started in 2004, Alicia Robb and David Robinson concluded that 80-90% of start-up capital for a typical firm came from two sources. One was the entrepreneur's savings. The other was external debt: either a bank loan or a credit-card balance.

Most start-ups do not require huge amounts of capital. The average in the Kauffman sample was $78,000. Some need far less. Saudia Davis, for example, founded Greenhouse Eco-Cleaning, a green apartment-cleaning firm in New York, with $800 she earned from mopping floors herself. She now has between seven and ten cleaners working for her and would like to expand, but banks are not lending, she says. She is looking for an "angel" investor but this is tough when you have no intellectual property, so she may have to grow organically.

The recession itself sometimes generates start-up capital, in the form of severance payments. Adrienne and Kelly Lumpkin got their start with the help of a redundancy package Mr Lumpkin received from IBM in the early 1990s when Big Blue was in trouble. Alternate Access, their Raleigh, North Carolina-based firm, helps florists, doctors and other small enterprises do clever things with internet telephony. It offers call-centre services, for example, and sells software that helps employees see, on their computer screens, whether the person calling them is an important customer or a deadbeat.

Despite the recession, Americans started 530,000 businesses a month last year. And firms founded during tough times have to be tough. Although more firms typically start up in fat years, Paul Kedrosky of the Kauffman Foundation found that each bad year in America since the second world war produced just as many firms that have subsequently grown large enough to list their shares. He concludes that firms that begin in bad times are more likely to turn out to become economically important: think of Microsoft, Apple and Krispy Kreme doughnuts.

During good times, any idiot can get his ideas funded, says William Barnett, a professor at Stanford University's business school. During bad times, only the most impressive and persistent entrepreneurs can. Mr Barnett has discovered that firms which are set up shortly after a successful IPO (initial public offering of shares) by another firm that does roughly the same thing tend to do very badly. By contrast, firms founded shortly after news of the bankruptcies of firms doing roughly the same thing tend to do well. Google, for example, got started just after a clutch of other search-engine firms crashed.

During a crisis, says Mr Barnett, the market's signals are clearer. During a boom, people buy stuff without much thought. During bad times, they are much choosier. So only firms with genuinely superior products or services will thrive. 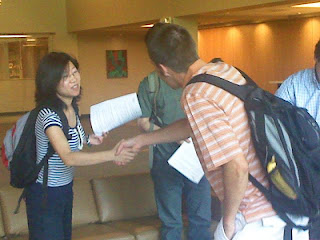 sent from my treo
Posted by Howie Rhee at 7:16 AM No comments:

Howie Rhee
Durham, NC, United States
Howie's goal is to help Duke become one of the best places for student entrepreneurs. Check out my profile on About.me